For a long time now, I and my family have used an Apple TV as our media PC. Not those newfangled ones with third-party games and apps, but the older generation, those with a set of pre-installed "apps" which let you access certain quarantines of content, such as Netflix, YouTube, iTunes, etc.

The Apple TV worked well enough when accessing content from those sources. The Netflix client was good, the YouTube client kind of lackluster, and the iTunes client decent enough. There various other "apps", but those went mostly unused. The main problem however, affecting basically everything on the platform, is that I live in Norway; as a result, most of the time, somewhat new TV shows or movies we want to watch simply isn't available through those sources. Often, we needed to play video files obtained through other means. This left us two options:

One day, I decided I'd had enough. I found an old laptop, threw Linux on it, connected it to the TV, and started writing code.

MMPC, Mort's Media PC, is the fruits of my endevours. It's designed to be controlled from afar, with a web interface. It's also written in a modular fashion, and I'll go through what each module does.

The media streamer module is the most important module. When playing a movie or episode from a TV show, we generally have a torrent containing the media file. In the past, we would download the movie from the torrent file, and then find a way to play it on the TV when it's done. This module however lets us instead either paste in a torrent link, or upload a torrent file, and it'll stream that to a VLC window which opens on the big screen. VLC also comes with a web interface, so once you start playing a video, the browser loads the VLC web interface, and you can control video playback from there. 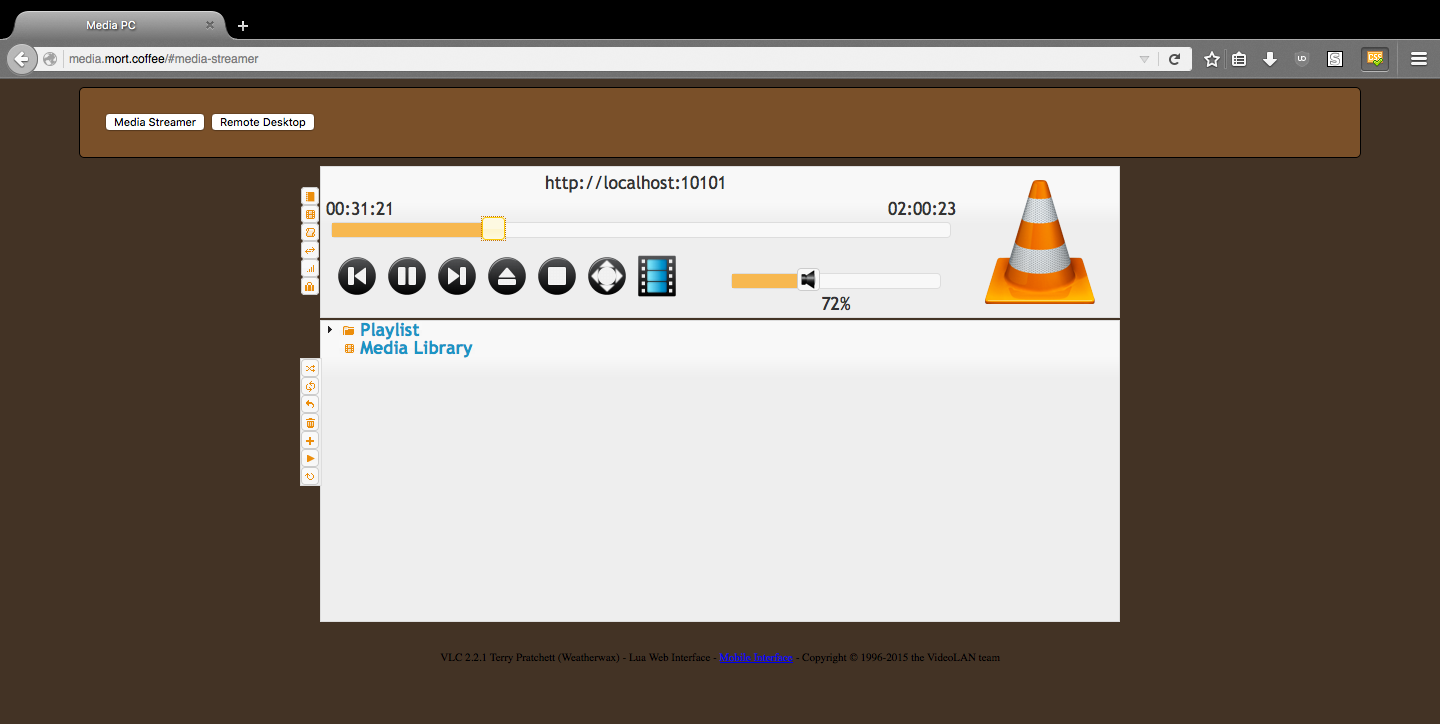 Sometimes, you need more than streaming torrent files. Netflix, for example, is very useful, whenever it has the content we want to watch, and the same applies to various other websites. As the computer is running a full Linux distro instead of some locked down version of iOS, it's useful to have a way to control it directly. However, it's also annoying to have a wireless keyboard and mouse connected to it constantly and use that. Therefore, I decided it would be nice to be able to remote control it from the browser.

Implementing remote desktop in the browser sounded like it would be an interesting challenge. However, it turned out to be surprisingly easy. There's already a library out there called jsmpg which basically does everything I need. It has a client to stream an mpeg stream to a canvas element, and a server to stream to the client using websockets. The server also has an HTTP server, which you can stream video to and have it appear in all connected clients. Ffmpeg can both record the screen, and output to an HTTP server.

Once I had streaming video to the client working, the rest was just listening for various events on the client (mousemove, mousedown, etc.), and send HTTP requests to an HTTP server, which then promptly runs an xdotool command, and voila, remote desktop. 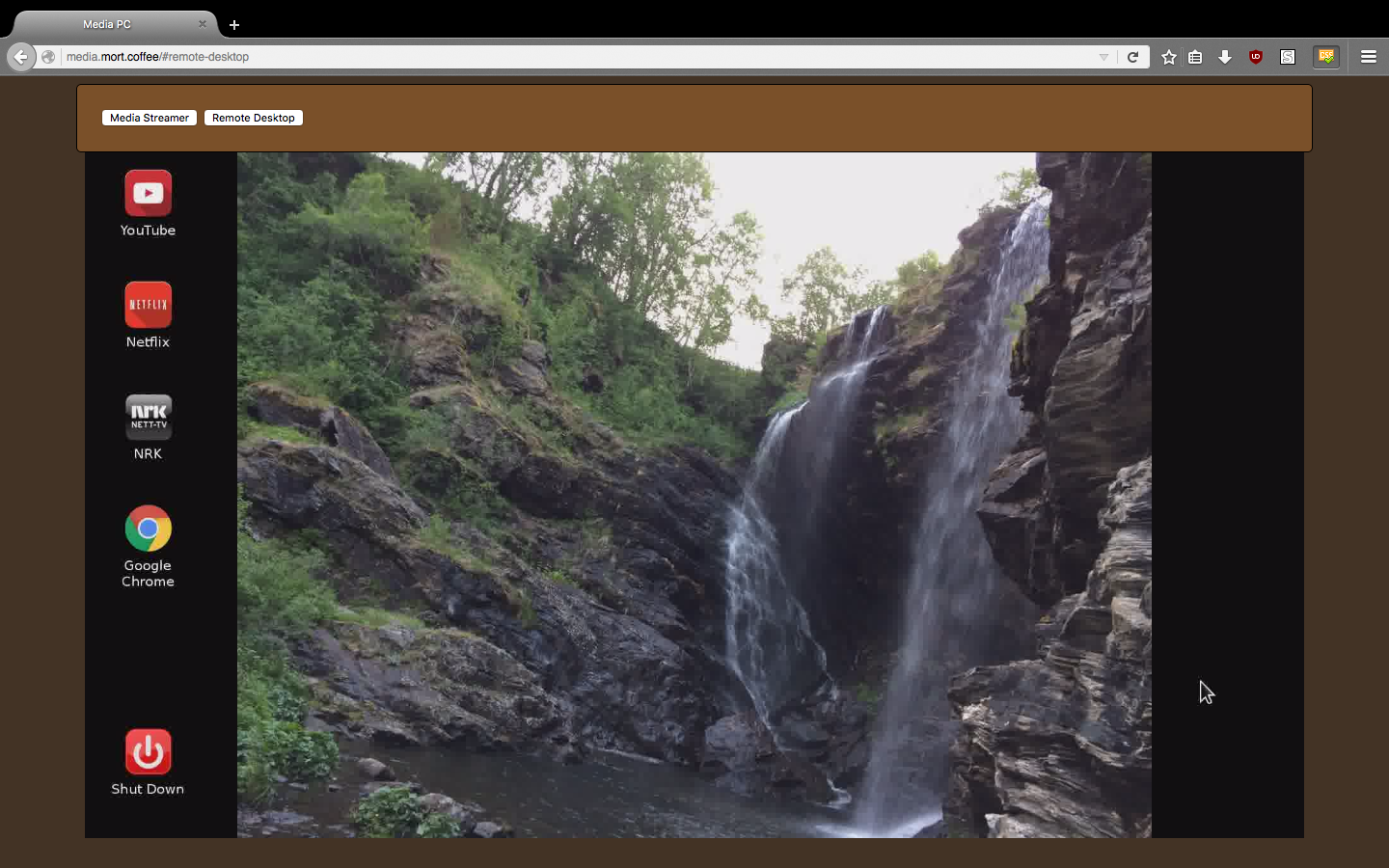 One nice thing about the Apple TV is that it can be set to display random pictures in your photo gallery, which is very nice. However, those pictures have to be in your iCloud photo library, which is sort of problematic, considering I don't use Apple devices, and dislike that kind of platform lock-in for something as important as photos. I therefore moved everything from what we used to use for photos, a shared iCloud photo stream, over to a NAS, mounted that NAS on the media PC as a webdav volume with davfs, and wrote this module to pick a random picture every 5 seconds and set it as the wallpaper. If the random picture it picked was in portrait orientation, it will find another portrait picture, and put them side by side using imagemagick before setting it as the wallpaper.

Media PC software already exists. However, both Plex and Kodi, to my knowledge, sort of expects you to have a media collection stored on hard drives somewhere. They excel at letting you browse and play that media, but we rarely find ourselves in a situation where that would be beneficial. Most of the time, we just want to watch a movie we haven't seen before and have had no reason to already have in a media library, and we generally decide what movie to watch shortly before watching it. Writing the software myself lets me tailor it specifically to our use case.

UPDATE: It has come to my attention that Kodi has some addons which let you stream torrent files. However, even with that, there are some things Kodi doesn't do:

You could get many of the features I want by using Kodi by installing, and maybe writing, lots of plugins, but I'm not convinced that would've been mch easier than just writing the thousand lines of javascript this project required.